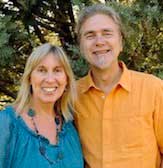 Claude and Julia PAYAN have been "in the ministry" for over 25 years.

They began by developing their call through singing, spending several years traveling to various churches and denominations. Together they produced several cassettes and CDs of songs that they have written.

This call grew and progressively became inseparable from preaching and teaching the Word of God.

Having spent 7 years serving in a more traditional context, Claude and Julia decided to change their situation in order to fulfill their hearts' yearnings. They spent the following 15 years in a new vision: "Souffle Nouveau" (New Wind).

They continued to travel during these years at the same time as being Pastors to a church in Toulon in the south of France.

During 2007, they brought their pastoral ministry to an end and gave a fresh direction to Souffle Nouveau (believing that we need to recognise the end of a period in order to ride a new wave) allowing them to give themselves more clearly and fully to their call to the entire Body of Christ..

Their ministry today consists of visiting churches to share their years of pastoral experience, and conferences where they often speak.

They work with ministry teams from various denominations and continue to write and record new songs, as well as writing and publishing new writings.

Homepage » Shop » Author » Claude Payan
View basket “The New Annointing and its Manifestations” has been added to your basket.